UMass Amherst EMS would like to shine a Spotlight on junior Joseph McGaunn from Topsfield, MA. Joseph was nominated by two of our Directors for his amazing leadership during a recent Mass Casualty Incident training for UMass EMS. “He did a great job extricating his patients in a controlled manner during the chaotic MCI scenario”. It was also noted that he had many accomplishments, a very impressive work history, and tremendous aspirations for the future.

Joseph has been a member of UMass EMS since Fall of 2017 and is known to be a pleasure to work with. UMEMS is grateful to have someone like Joseph on our team.
Joseph is a biochemistry and molecular biology major as well as a psychology major with a focus on neuroscience. After UMass, he plans to attend a MD/PhD program so that he “will be prepared to effectively study the transgenerational and environmental epigenetic mechanisms involved in neurological and psychiatric disorders”. He hopes that his research will have a positive impact that could lead to novel treatments, a greater understanding of mental health disorders, and eventually influence policy decisions.
Joseph is also highly involved in extracurriculars at UMass. He greatly enjoys his position of Executive Co-Director for a podcast called “A Little About a Lot”, which is put on by the Umass iCons program. He has also landed a Research Assistant position in the Suvorov Lab, which looks at how the environment of the parents may affect offspring neurodevelopment and metabolism. Despite having a seemingly impossible amount on his plate, Joseph still finds time to intern at New England Biolabs, shadow in neuro-oncology and neurosurgery at Dana-Farber and Brigham and Women’s, and volunteer at Not Bread Alone Soup Kitchen in Amherst.
Outside of school, Joe loves to hike, sing, and read anything related to science, philosophy or politics. His only flaw… he can’t whistle. Joseph would like to thank those who nominated him to be the first Spotlight of the week for Umass EMS. We would like to thank him for his dedication, optimism, and leadership that he has demonstrated both within UMEMS and in all areas of his life.
Originally shared by UMass Amherst EMS on Facebook. 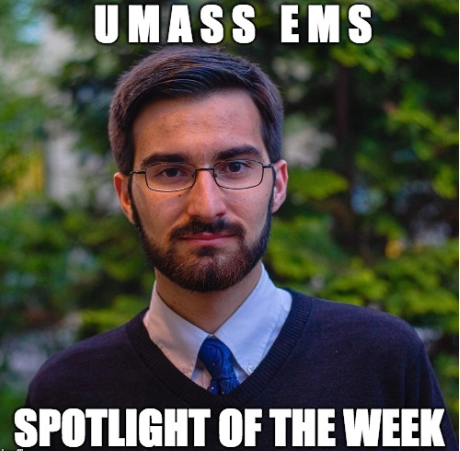