A Chat with Signe Motter 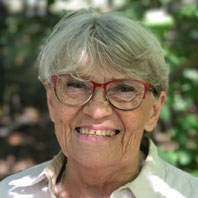 Signe Motter has been my mentor since the fall of 2017 and I have enjoyed every minute of it! Our mentor ‘sessions’ were always just a conversation between the two of us. Through these conversations, we got to know each other better, and through that, we could make suggestions to one another of different subject matter that pertained to school….. or did NOT pertain to school.

Marshunda: Thank you for agreeing to be ‘interviewed’ Signe. I know you don’t like to be made a big fuss over.
Signe: That’s alright Marshunda. Only because it’s you do I agree! (laughs)

Signe Motter was born in Tromsø, Norway (which is 217 miles north of the Polar Circle), and she attended the public-school system. In Norway, the public-school system was influenced by the Steiner School curriculum, even though there were official Waldorf Schools in the country. (The first Norwegian Waldorf school opened in 1926.) Signe reminisces about the many similarities of her public school and her cousin’s school in Oslo. The Oslo public school had more resources than the country schools, so they could offer more classes like Form Drawing and many other arts. It depended on each school on how they extrapolated from the Steiner curriculum.  To Signe’s surprise, later in life while training to become a Waldorf teacher, she realized that her training was very similar to the education that she had received as a young girl.

While in the early grades, Signe’s favorite subject was Geography. She LOVED it! She would pour over the entire atlas or globe and lose herself in the different places she found. She didn’t like writing, but she was completely fascinated by geography and history. Because of this love, she loved to read and research different places in the world. (In the graduation speeches this year, one eighth-grader mentioned Signe’s elation whenever she taught history or geography.)

In both grammar school and high school, Signed adored the English language.  Her school also had French and German language classes, but she loved the English class the most! She would read beyond what her teacher assigned. She would even read her older brother’s old English books! When Signe was about thirteen years of age, George M. Schultz’s Peanuts comic strip, featuring Charlie Brown, came to Norway and was translated into Norwegian and of course English. Signe purchased the English translation of Peanuts and read all the comics. Later, when she was about fifteen years old, she discovered John Steinbeck. To this day, she still has the first Steinbeck book that she purchased.

Signe attended the Gymnasium, which is equivalent to two to three years of American college. Signe chose to specialize in Liberal Arts, but Old Norse Mythology and Math were other disciplines offered. After attending the Gymnasium, Signe, about nineteen years old, began working with prisoners.

Why did Signe work with prisoners you ask? Signe did a practicum, which is the equivalent of an apprenticeship. Signe has always had an interest in handwork and woodwork, so her practicum work allowed her to work with drug addicts to bring focus back into their hands. She was able to give prisoners a re-introduction to life through the arts and crafts. All the while, Signe was still learning about textile arts: spinning, weaving, design, etc. Signe waxes on about how AMAZING her teachers were! She learned from Masters at the same time as she was building her life skill sets.

ALERT: Here is a random aside, but very important in showing how cool Signe is!

Signe’s family has a history of being fishermen and farmers. During the winter, her grandfathers and/or uncles would sail towards Greenland and Newfoundland to catch tons of fish. During World War II, she had uncles sailing ships for the Allied harbors. Her uncles rode convoys between the US and England. The convoys were transporting food, tanks, and other war materials from America. During these convoys, there were lots of submarine attacks from the Germans. Because of the fraught traveling, one uncle lost a leg and another uncle lost an arm. Losses were great for both the Germans and the convoys of Allied ships. But being on or near the water ran through Signe’s blood.

When Signe was younger, from about the age of twelve until about 16, she wanted to join the Merchant Marines and become a communications officer. Because of Signe’s love of geography and languages, her knowledge of the morse code alphabet, and her fam’s maritime history running through her veins, this dream, using all of the knowledge that she gobbled up in her youth, would have been right up her alley. She wasn’t only dreaming about the harbors of Norway, she was dreaming about crossing the water around the world.

After her practicum, at about the age of 21 or 22, she applied to the ergotherapy school, which is equivalent to occupational therapy. Ergotherapy is the study of movement and motion and would allow her to work in any branch of social medicine. Ergotherapy was still fairly new and many of the textbooks were in English.  The school only accepted 18 students every 18 months. Signe was accepted but had to wait until the following year to begin. While Signe waited, she found herself in Long Island!

Signe’s mom had a friend who lived in Long Island, and they desperately wanted a Norwegian au pair. So, as Signe waited to begin the ergotherapy school, she spent that year as an au pair in Long Island. While she was there, her American boyfriend came to visit and proposed to her. Did I mention she had a significant other? They met while in England when she was 18 years old.

Signe married Andy Motter in Norway during the Vietnam War. Andy’s parents worked at The Newark Art Museum, but they retired to their second home in Keene, NH. Signe and Andy lived in Keene for a little while but then moved to Boston. Signe ended up NOT enrolling in the ergotherapy program.

When Signe moved to Boston, she didn’t know anyone. One day, she was out walking in Boston and happened upon a bookstore. In this bookstore, she found three books on Rudolf Steiner. She was so surprised that this little American bookstore had these three books on Steiner! She purchased them right away! Within weeks of purchasing these books, as Signe strolled about Boston, she happened upon the Boston Waldorf School! This school later became the Belmont Waldorf School, and is now the Lexington Waldorf School. Signe and Andy later moved back to Keene and they started the Monadnock Waldorf School in their home.

Signe was the Early Childhood teacher and her young children, along with other little people, gathered in her living room and formed the first class of the Monadnock Waldorf School. Andy was president of the board and Signe remained the E.C. teacher for about eight years. Then Antioch University had started a Waldorf teacher training program, of which she was in the third group to enter that new program. For her six week internship, she chose to intern at a public school so that she may obtain knowledge on the American school system. Signe pauses and tells me that it is hard to talk about that internship. All she can say is that she has such admiration for the teachers teaching in the American public school system. Period.

After her internship, she took a first-grade class at Monadnock. According to Signe, the first six weeks felt like ONE. LONG. DAY!!! She had twenty-four students: eighteen boys and six girls. Interestingly enough, no woman had taken a class all the way through to eighth grade. The woman would leave for some reason or another. So, Signe was DETERMINED to break this ‘curse’ and be the first woman to take a class all the way through to eighth-grade graduation. Signe eventually took three classes through to graduation. During the last class of fifth-graders at Monadnock, Andy (Signe’s husband) passed away. After Signe graduated this class, the Princeton Waldorf School called Signe seeking help.

The Princeton Waldorf School needed an eighth-grade teacher for one year. Signe’s daughters and grandchildren were there at the school, so she decided to move to Princeton. After this year, the fifth-grade teacher decided to leave, so Signe stayed another four years. The following year, Signe did a lot of traveling mentoring other Waldorf teachers, and she came to Moraine Farm to teach a block for Mr. Dorring’s class. After Mr. Dorring decided to leave, Signe was asked to take the rising sixth-grade class. (YAY FOR MORAINE FARM!)

One of her fondest memories of this graduating class was when they went spelunking. “I had said no to other classes, but I had a sneaking suspicion that I’d say yes this time,” Signe reminisces.  “We got to the cave and I went down this really dark hole! I knew this would be the last time I would have a chance to do something like this. There is just something about this class that I felt comfortable with. I was SOOO super aware of my body in that tight space that literally and physically touched me all around. I was slithering and snaking on my stomach! I was NOT afraid! I was calm and focused. I even checked in with myself…’Nope. I’m not afraid.”

According to Signe, she has always loved class trips, “especially the getting really dirty part” she laughs. “. I come home and I LOVE my bath! I’ve also always loved the plays and playing recorder with this class.”

I asked Signe what will she miss about teaching a grades class?

“Every school has a different smell. I get to school early and I putter around. I will miss that. I will also miss feeling the artistic, creative energy of the students…and the recall. The students give you the energy to keep going. I will miss the colleagueship with my peers. I can count on two hands when I’ve woken up and thought, ‘I don’t want to go to school.”

I have been an adjunct employee of Antioch and Center for Anthroposophy for more than 25 years. It is true that I have been the instructor, but the dozens of students whom I have been instructing have also been MY teachers. It has been an ongoing learning experience for me and will continue to be an ongoing experience.”

I speak for all my colleagues when I say that we will miss seeing Signe around the school on a daily basis, as well as her insights to life that she sometimes unknowingly offers.